The Universal Language of Jazz

George Kahn Quartet -
You And The Night And The Music

%%FirstName%%, George Kahn grew up in New Rochelle, NY. Pat Kelley is from Tulsa, Oklahoma. Alex Acuña was born in Patavilca, Peru, a small city about 3 hours from the capital city of Lima. David Hughes was born in Säffle, Sweden.
These four individuals come from vastly different backgrounds, but they were all drawn to Los Angeles due to their desire to play music, and specifically due to their love of Jazz. Together, they are the George Kahn Quartet, bringing "classic" jazz into the 21st century.
Since moving to Los Angeles in 1976, George has had the pleasure to play with many amazing jazz musicians, and now during the last few years this quartet has been honing its craft in the jazz clubs of Los Angeles. With a successful Kickstarter campaign completed, it is now time to go back into the studio to finish their new album.
Here is the FOURTH single from the new album. "You and the Night and the Music" is a popular song composed by Arthur Schwartz with lyrics by Howard Dietz. The song was debuted in the Broadway show "Revenge with Music". The show opened in 1934 and ran for about 5 months. The musical yielded two enduring hits and a profit, although it was an artistic failure. The music lives on - Enjoy!

LAST DAY - 12 hours to go for the DreamCatcher Kickstarter!!!!!!

I was thinking yesterday that there will come a time in the not too distant future that we will say, "Remember that month when there was no traffic, and the air was clear, and we were able to walk the dog and spend time and reconnect with our kids?"
Call me an cockeyed optimist, but I woke up this morning, singing this song. Here is an AMAZING virtual choir, featuring my friends Macain Treat, Crystal Starr and Courtney Lemmon (Courtney and Crystal are two of the singers in The Jazz & Blues Revue! http://jazzandbluesrevue.com)
By the way, today is the final day of my Kickstarter for the new album, DreamCatcher. If you have not pre-ordered your copy yet, today is the last day! Check it out here:
http://bit.ly/GeorgeKahnDreamCatcher

Get Music AND Give To Those In Need

On March 1 we launched our Kickstarter for my 10th jazz album, DreamCatcher.
Little did we realize that, oh my, in just a few short weeks later, we’d be in the middle of a global pandemic.
Now 17 million Americans have filed for unemployment, and countless businesses are closed;
who knows when they’ll reopen, or if they’ll reopen

For our campaign we are only $250 away from reaching our goal,
But I’m not worried about that – I know we will hit our target and get the album done.
I’m more concerned about the countless musicians that have lost work, can’t make their rent, or put food on the table.

So between now and the end of the campaign on April 17, I’ll donate HALF of whatever is pledged to charity to help feed those in need.
If you pledge $20 for an album, I’ll donate $10 to THE CALIFORNIA JAZZ FOUNDATION, or to FEED CULVER, our local foodbank.
You can get more information below. Whatever amount you pledge, I’ll donate half of it to help others.
So think about it. If you have a chance, get some great jazz music, pledge $20 (or more), you’ll get an album and $10 will be
donated to a local charity to help out.
Thanks so much, really appreciate your help.
Great seeing you, and please, stay safe!

Wow - we launched the Kickstarter on March 2, and we are already over HALFWAY THERE!!
Thank you for your support - and it's not too late to have your friends join in. The "Two-fer" special reward ends on March 23, so now is the time pledge.

Please join me in the launch of my new jazz album for dreamers and lovers, "DreamCatcher".
The campaign runs until April 10, and you have an opportunity to pre-order the new album, or get other cool rewards.
Remember: "Now is the new Later", so do it now!
Here is the promo video for the George Kahn Kickstarter campaign.


It features George on piano, with Alex Acuña on drums, Pat Kelley on guitar and David Hughes on bass. We are performing "I Feel Pretty" by Leonard Bernstein as it will be featured on the new album. Jonathan Brock and his team do a great job filming the session. I think you get a real sense of the joy and excitement we had recording that day. Watch it here, and then pledge at
http://bit.ly/GeorgeKahnDreamCatcher
https://youtu.be/lUMNZkgUH1s

There is a long history of jazz intersecting with Broadway musicals, and one of the all-time great musicals is West Side Story (book by Stephen Sondheim and music by Leonard Bernstein). In the show, "I Feel Pretty" plays as an uptempo waltz as Maria dreams about her date night coming up that evening.
Over the years this tune has been re-worked by Oscar Peterson, Dave Brubeck, Andre Previn, Stan Kenton, Marion McPartland and Dave Grusin, just to name a few. It is now the first single from the upcoming George Kahn Quartet album. The video was just released this week!

This is my third time using Kickstarter to launch a new recording. It is a great way to get you involved in the project, so you can be part of the creation as well as receiving a copy of the album when it is all done later this year!
The album features George on piano with Alex Acuña on drums, Pat Kelley on guitar and David Hughes on bass.
There are a few "Early Bird Special" rewards available right now: a two-for-one CD special, as well as a handful of tickets for the "Kickstarter Kick-Off" House Party on March 14. Please take a couple of minutes and visit the Kickstarter, and pledge today! Thank you in advance for the help.
http://bit.ly/GeorgeKahnDreamCatcher

Come Join The Party on December 8

Sunday Dec. 8 The George Kahn Jazz & Blues Revue Annual Holiday Party has changed venues! - $25 cover plus minimum.  Tickets are on sale now, so mark your calendar for the best holiday party of the year, not to be missed! We will be doing a set of holiday tunes, plus our Tribute to Aretha Franklin.
This year we will be having the party on the rooftop of the Kimpton La Peer Hotel,  27 N La Peer Dr, West Hollywood, CA 90069. If you only go to one holiday party this season, this is the one. More info when tickets go on sale later this month
Here is the link to buy tickets: CLICK HERE 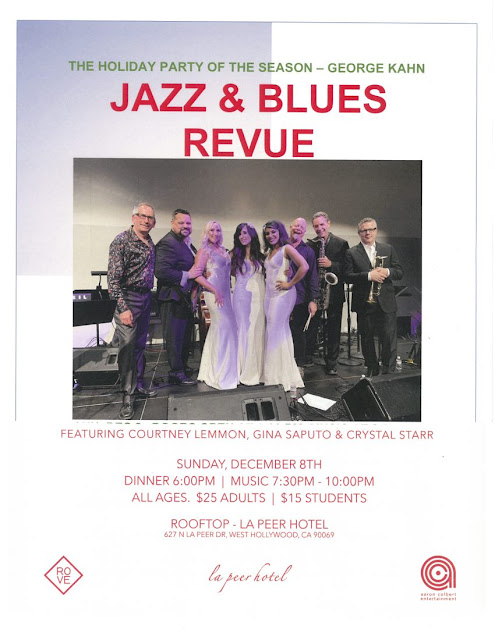 Click here to return to GeorgeKahn.com for more music 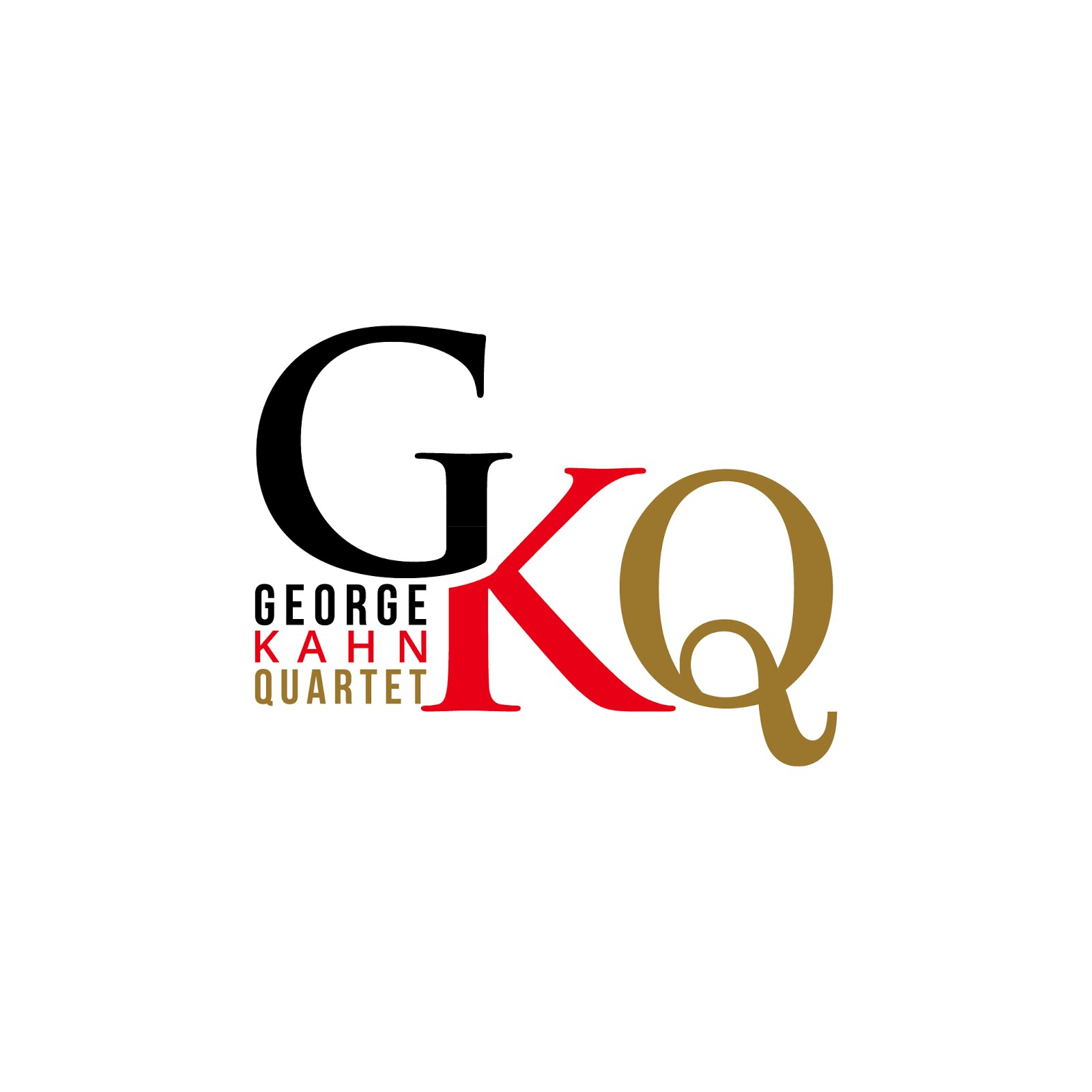 Click here for Friday Musical Moments - I'll deliver a great song to your inbox every Friday!

Have piano. will travel! 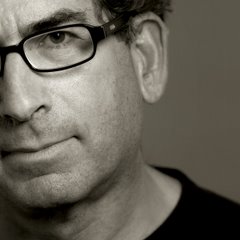 Trying to Make It Real - Compared To What?

GKahn
Los Angeles, CA
George Kahn plays "West Coast Jazz" in its truest form. In addition, he works as a Mortgage Banker in Los Angeles, with 30 years of experience in that business. With 9 albums released on his own record label (PLAYING RECORDS), and a 10th on the way, you would think he would have learned his lesson by now - but NO!

What I am listening to now